Home » Case Studies » When Comedic Stereotypes Cease to Be Funny

When Comedic Stereotypes Cease to Be Funny

CASE STUDY: The Controversy over Apu and The Simpsons 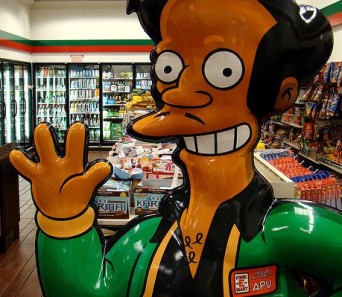 From characters such as Tonto in the 1950s show, The Lone Ranger, to Apu Nahasapeemapetilon from the highly acclaimed cartoon The Simpsons, racial and ethnic stereotypes remain an abiding concern throughout the media. Though strides toward equal representation and accurate racial depiction in movies and television are being made, racial stereotypes and jokes regarding race and racial stereotypes continue to run rampant across genres. This is especially true for comedy, a genre that thrives on pushing the boundaries of appropriateness, tasteful humor, and what is often called “political correctness.” An important part of this debate centers on whether these stereotypical portrayals made for the sake of getting a laugh are truly harmful or if they are simply making hot-topic issues seem less dauntingly serious.

Following the making of a documentary by comedian Hari Kondabolu entitled “The Problem with Apu,” The Simpsons has faced an onslaught of criticism about Apu, the Indian convenience store owner with a heavy accent. The show responded via a scene featuring a short interaction between characters Marge and Lisa in its 29th season; Lisa breaks the fourth wall and states to the camera, “Something that started decades ago and was applauded and inoffensive is now politically incorrect. What can you do?” Many concerned with the show’s portrayal of Indian-Americans seemed to perceive this response as dismissive. Matt Groening, the creator of The Simpsons, has largely written off the backlash saying, “I’m proud of what we do on the show. And I think it’s a time in our culture where people love to pretend they’re offended.” Others who have worked with the show do not share the same sentiment. The non-Indian voice actor behind the Apu character, Hank Azaria, indicated that “The idea that anyone, young or old, past or present, was bullied or teased based on the character of Apu, it just makes me really sad. It was certainly not my intention. I want to spread laughter and joy.”

Defenders of The Simpsons feel that comedy should be able to delve into controversial issues without repercussions. Danielle Gutierrez exhibited such a perspective on the controversy, writing in a blog post “While tastefulness is a virtue when approaching touchy topics, being overly vigilant can be just as questionable as insensitivity.” Comedy is intended to make audiences laugh. Tense or difficult issues can be perceived as more approachable through jokes. Additionally, there is the chance that stereotypical ethnic and racial depictions can be used in ways that ultimately challenge these negative stereotypes. For instance, the ABC sitcom Fresh Off the Boat attempts to give an accurate representation of Asian American life that does not end up by putting its characters into stereotyped boxes.

When does the use of potentially offensive stereotyped depictions of race and ethnicity go too far in artistic expressions or comedic employments? In Kondabolu’s documentary, actor Utkarsh Ambudkar argues that “The Simpsons stereotypes all races, the problem is we (South Asians) did not have any other representation.” Such racial depictions become harmful when they form a basis for audience opinion and perception of a minority group. A study of stereotypical portrayals of African Americans in television by Thomas E. Ford found that these portrayals have a priming effect: “Stereotypical television portrayals of African-Americans in a humorous context increase the likelihood that whites will perceive an African-American target person in a stereotypical manner.” This study implies that these stereotypical depictions can carry a harmful, social weight. How can we balance the use of stereotypical depictions of race and ethnicity in comedy without reinforcing social biases?

Deb, Sopan. “‘The Simpsons’ Responds to Criticism about Apu with a Dismissal.” The New York Times, 9 Apr. 2018, Available: www.nytimes.com/2018/04/09/arts/ television/the-simpsons-responds-to-criticism-about-apu.html.

By Scott R. Stroud in Case Studies, Posts on July 8, 2018.
← Doxing and Digital Journalism #MeToo and the Arts →