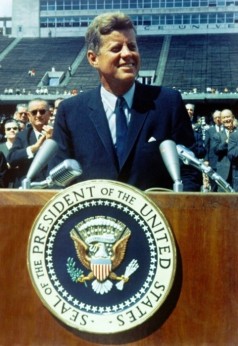 Political speechwriters and teachers have existed since ancient Roman and Greek leaders sought the help of skilled sophists to help them publicly relay their ideas in an accessible yet eloquent manner. The American political system naturally replicated the idea with many presidents hiring an adept writer to serve as their speechwriting advisor – someone who could help mold their rhetoric to reach the American people far and wide. While these “ghostwriters” were generally kept discreetly shrouded from the public eye, recent decades have seen a rise in their publicity through autobiographies and journalistic exposés.

The number of public presidential addresses has increased dramatically with every term, resulting in a more pressing need for speechwriting assistance over the last few decades. Presidential addresses were relatively rare until the rise of electronic media. Once the majority of American homes could tune in to political discourse with their radios or television sets, the demand for the president’s voice escalated. In his book Ghostwriting and the Ethics of Authority, John Knapp points out that “Abraham Lincoln gave an average of 16 speeches per year as president; Harry Truman averaged 88, Bill Clinton 550, [and] Obama gave 411 in his first year in office” (Knapp, 2016). It has become increasingly unrealistic for presidents to author every one of their hundreds of political speeches throughout their presidencies in addition to attending to their primary duties as president. When Obama’s speechwriter Jon Favreau asked Press Secretary Robert Gibbs why the president needed help speechwriting when he was already a published author, Gibbs replied, “If there were 48 hours in a day, we wouldn’t need a speechwriter” (Knapp, 2016). Yet, this mechanism of efficiency opens up a number of ethical challenges.

It is true that a writing assistant who can take the president’s ideas and quickly write up an articulate speech is pragmatic, and the general public is growing increasingly aware that modern presidents are hardly ever the sole visionaries of their speeches. But concerns have been voiced about the authenticity of messages authored by a person not talking the talk. The one uttering the message is generally taken to be the source of its ideas and what it advocates; there is a relationship of authenticity between that message and that evident source of the message. Thus, some critics claim that most presidential speeches are deceiving and unethical if the speechwriter remains anonymous and unrecognized by the public. Many politicians throughout American history have insisted that their speechwriters remain anonymous so as not to minimize the message’s authority as coming from the president. In fact, Lyndon B. Johnson apparently told his speechwriter to have “a ‘passion for anonymity’” (Schlesinger, 2008). But some say that this nameless method “represents a kind of audience deception akin to plagiarism” (Bormann, 1984). If the message is not attributed to its rightful author, how trustworthy can it be? Indeed, during the 2003 presidential campaign, Congressman Dennis Kucinich publicly criticized some of the candidates with known speechwriters, exclaiming: “If a president has a ghostwriter, who’s the president” (Brandt, 2007)? Unlike an actor playing a part written by a screenwriter, many audience members assume that the president is the source of the statements they are asserting, and that the president believes these arguments and claims to be aligned with or coming from their beliefs and values.

Beyond the authenticity concerns, other controversies can quickly arise when someone is given the authority to communicate to large audiences under a politician’s name. Thus, some critics have even gone as far as to claim that a political speechwriter could potentially use their role to exercise influence, especially if the politician is unlikely to read through the draft thoroughly. While this may seem far-fetched, it isn’t unheard of. For example, in 1992 when U.S. Congressman Ron Paul was briefly out of the office, one of his staff ghostwriters wrote blatantly racist comments in the politician’s newsletter. The only publicly named author of the newsletter, however, was Paul himself.

Digital media has further complicated the ethics of speechwriting, as social media communication is becoming a standard for presidential messaging. Barack Obama was the first sitting president with a Twitter account and there is little doubt that this trend will continue beyond the often-tweeting President Trump. With the significance of media authenticity and demand for real-time responsiveness, challenges have already arisen with the question of using ghostwriters on social media – especially when digital platforms may be more easily accessible and vulnerable to abuse than Ron Raul’s 1992 paper newsletters.

Despite the growing ethical questions about presidential speechwriting and ghostwriting, many people still believe that the process can be trustworthy, especially if done using a certain level of transparency. Psychologist David Gruder argues that speechwriting is completely moral when intent and responsibility are brought into the conversation. He cites the relationship between President John F. Kennedy and his speechwriter, Ted Sorenson, as one that built a strong model for ethical speechwriting. Kennedy was known for publicly acknowledging and embracing the fact that Sorenson had a heavy hand in writing Kennedy’s most famous presidential speeches. Not only was he clearly transparent about Sorenson’s role, but he also took equal responsibility for the message and made sure that he and Sorenson agreed on the message’s intent and meaning. Gruder states that “Kennedy appears… to have spoken what was authentically true for him even when the perspectives and the words he used to express them were written by Sorenson” (Conner, 2014).

Nevertheless, even in the most virtuous of political relationships, ethical concerns may arise. For example, like Kennedy, President Franklin D. Roosevelt was also one of the many presidents who had a trusted speechwriting team: Raymond Moley, Samuel Rosenman, and Louis McHenry Howe. The trio would often compete in good fun with each other to be the one whose speech draft made it to the president’s podium. In fact, for Roosevelt’s Inaugural Address, Moley typed out a speech while Roosevelt re-wrote it in his own handwriting so the other writers wouldn’t become jealous that Moley’s draft was chosen. However, unbeknownst to Moley until years later, Roosevelt credited himself as the sole author of the speech and several publications and biographies afterward did the same. Moley angrily challenged the accreditation in his own memoir, stating that the speech was, in fact, written mostly by himself (Knapp, 2016).

In the end, whether it be a full speech or text on a politician’s social media account, political ghostwriters are in more demand than ever. Many argue that speechwriters only truly exist to take a bit of labor off their hands and make sure the president can effectively communicate their sentiments in a way that is easily digestible by the public. Especially with an audience as massive as the entire country, it’s crucial that the message be expressed in the way it was intended. While this is all fine in theory, others contend that the proliferation of ghostwriters pose a number of ethical problems for the nation, including unaccountability for anonymously written speeches or the potential to negatively influence a figure of authority’s rhetoric. Given the already increasing number of speeches expected from presidents combined with new challenges raised by the normalization of social media, political speechwriters are unlikely to go away any time soon. Thus, it is important for us to consider how we might reconcile these dilemmas so that the American people can receive messages from their representatives as authentically as possible without said representatives using up all of their time to craft messages instead of running the country.

This case study was produced by the Media Ethics Initiative and the Project on Ethics in Political Communication. It remains the intellectual property of these two organizations. It is supported by funding from the John S. and James L. Knight Foundation. This case can be used in unmodified PDF form for classroom or educational uses. For use in publications such as textbooks, readers, and other works, please contact the Center for Media Engagement.