Media Freedom and the Middle East: Pursuing a Self-Regulatory Approach in Qatar

Cloak of Invisibility: Perceived Privacy and the Ethical Study of Digital Fan Culture

The Spectacle of Lynching Redeployed: On the Performance of Democratic Regard

Weather Media in the Public Sphere

BYOD! Should We Really Ask New College Grads and Employees to Bring their Own Devices to Work?

Is Incivility Ever Ethical?

The Preference for Idealized Imagery in the Media and Detrimental Self-Perceptions Among Women – When does it Begin?

Engaging Newsrooms in the Digital Age

The Real Ethics of Fake News

How to Survive the Robot Apocalypse

The Ethics of Virtual Reality

Can We Shop Our Way to a Better Planet? The Promises and Pitfalls of Green Consumption

Anthems and Activism: Mediating the Politics of the NFL

Media Psychology’s Explanation for Why You love Stories: A Morally Ambiguous Resolution

Are New Media Technologies Good for Education and Democracy?

The Dark Side of Social Media: A Panel Discussion

Who Speaks for Ambedkar? The Debate over Navayana’s Edition of Annihilation of Caste and the Buddhist Teaching of Right Speech

American Journalism’s Ideology: The Question of Bias in the Media

We’re All Gatekeepers Now: Journalism Ethics for an Unfiltered Age

Rhetorics of the Good Life: Social Ontology, Ethics, and Communication

Habitus, Doxa, and Ethics: Insights from Advertising in Emerging Markets in the Middle East and North Africa

Trump, Clinton, and the Rhetorical Construction of Democracy in Campaign 2016 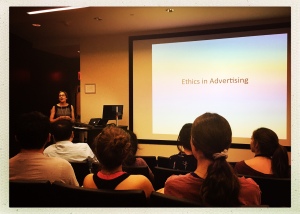